On this episode of Teachers Teaching Teachers http://teachersteachingteachers.org/?feed=rss2, Monika Hardy and Paul Allison discuss “Detox,” a reflective practice that they have been inviting students to do in their different contexts.

Monika has been doing Detox with her students for a couple of years http://labconnections.blogspot.com/p/what-is-detox.html 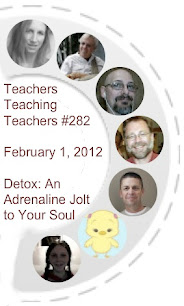 Recently, Paul started asking his students to reflect on their work, dreams, thoughts, and learning on Youth Voices: http://youthvoices.net/channel/31618

Monika and Paul are joined in this conversation by a co-conspirator with Monika and a researcher of Detox James Folkestad, from Colorado State University.

We also get the perspective of youths from two of Paul’s high school students Evelyn Salazar and (on the phone) Shamar Smith. In addition there are valuable insights from 7th Grader Kelsey Shelhart and her father Scott Shelhart as well as Fred Mindlin.

After listening to this podcast, you might be inspired to try something similar in your classroom or perhaps your students are already doing this kind of reflection on who they are, what they are doing, what they dream could happen, what they are noticing, and what connections they are making.

Either way, whether you are starting something new or continuing a valuable process in your classroom, please let us know about it. We’d love to hear if “detox” is spreading virally or “scaling across trans-locally” to use some of the language that Margaret Wheatley and Deborah Frieze have given us in their book Walk Our Walk On:

Taking things to scale doesn’t happen vertically through one-size-fits-all replication strategies… experiments move horizontally, scaling across villages and nations, trans-locally, as many diverse people learn from their discoveries and are inspired to try their own.
( http://www.walkoutwalkon.net/mexico )

On this episode of Teachers Teaching Teachers, learn more about the co-hosts of our webcast, +Chris Sloan @csloan, +monika hardy@monk51295, and +Paul Allison @paulallison

Recently, Monika had a meeting with Jared Polis, U.S. Representative for Colorado’s 2nd congressional districthttp://en.wikipedia.org/wiki/Jared_Polis . She shared with him her efforts in Loveland, CO at the Be You house and http://labconnections.blogspot.com . Perhaps this could become a true experimental lab to the state. “Perhaps we might get funding per census, as we crowdsource communities of practice.” Monika explains more, and gives a deeper history of the work she has been doing over the past four years.

Paul has recently updated a guide he uses to organize a passion-based curriculum with students using http://youthvoices.net and he would love thoughts about this document as well: https://docs.google.com/document/pub?id=1eqLUXP6TXxrtor-HnXOobZEVmwTMfex9TxOlnN5Z3iU This guide, which animates Paul’s classroom is part of a wonderful collection on NWP’s Digital Is: http://digitalis.nwp.org/collection/assessing-multimedia-compositions and Paul explains it in this resource on NWP’s Digital Is: http://digitalis.nwp.org/resource/1259

Chris talks about a survey he recently conducted with his students who are also using Youth Voices.

On this episode of Teachers Teaching Teachers, seven of us–Chris Sloan, Gail Desler, Fred Mindlin, Monika Hardy, Valerie Burton, Scott Shelhardt and Paul Allison–share our ideas, concerns, hopes, dreams, plans and strategies for moving our teaching away from prescribed learning toward a social change that puts students and their passions at the center of work together.

We find ourselves pondering larger pedagogical questions, discussing issues involved in working together, and brainstorming on nitty-gritty issues about how we might take advantage of the resources we have. Many of these questions will inform our conversations in future shows:

On this episode of Teachers Teaching Teachers, these seven teachers:

meet in a Google+ Hangout to talk about our classrooms, about http://youthvoices, and more! Monika Hardy also talks about the BIF Summit http://businessinnovationfactory.com/bif-7 that she recently attended with students as well as developments at the Innovation Lab.

If you were to create a space where learning would happen the way it does on the Internet, what would it look like? That’s what Monika Hardy has been thinking about and doing for the last four years. And now she is working with a group of people to produce a book about their work at the Innovation Lab.

Monika has begun to co-host Teachers Teaching Teachers over the past several weeks. She has modeled listening without an agenda and welcomed many new, inspiring voices to the show. On this episode Monika and her colleagues, Amy Lewark (with her son) and Jodhbir Singh have a conversation about the topics they are writing bout in their “quiet revolution.” Please take some time to read the text. They would love comments.

This is what Monika wrote recently on her own learning about learning on Lab Connections:

Previous to the last few years, I have been tinkering with teaching math within the public school system. Alongside, I have been listening to people, kids in particular, but all ages. A common thread, most people often share a sense of stress. They talk about being anxious for the end of the school/work day, or the end of the school/work week, or summer, or graduation, etc.

About 4 years ago, because of my reading so much of Seth Godin, I joined his online Triiibe. It was there that I met up with a small group discussing school. From that group I connected with one person in particular. We spent the next 6 months skyping, practically 24/7. We had so many similar ideas about life, school, stress. It felt like I learned more in that 6 months than I had in the previous years of my life. Whether or not it was more, it was most definitelydifferent. I think I can describe it best as a learning from my soul. It was something I couldn’t not do. I was hungry, craving to know more and more. How could we change up the way we spend the hours in our days?

That relationship/learning spurred in me three things in particular, that has been ongoing for the last four years now: a reading frenzy; a revolution of thinking facilitated by twitter; and an intense listening to youth.

Two years ago, kids crafted/designed a four year plan of disruption, while piloting a self-directed math course. [If you’re so inclined, see a bird’s eye viewof that unfolding, and/or more specifics to that first pilot year of self-directed math.]

We just finished year one of the four year plan (2010-2011). The Innovation Lab was a space within a public highschool, where 50 kids from the district (all ages, but mostly highschool, and mostly the highschool where we were located) came for one or more classes to practice/experiment with self-directed learning per passion, rather than curriculum/standards. We dabbled in game design, portugese, permaculture, homelessness, human trafficking, sign language, hebrew, dog training, neuroscience, pedagogy.

On this episode of Teachers Teaching Teachers, Monika Hardy and Paul Allison were joined by Matt Montagne, Alexander Pappas, Chad Sansing Valerie Burton, Amy Lewark, Julie Phelan and Cristian and a couple of other young people. We continued the conversation we started last week, Teachers Teaching Teachers #261 – Monika Hardy and colleagues discuss Lab: a plan of disruption to redefine school – 8.24.11, and we began to look for intersections between the Lab ;that Monika is facilitating in Loveland, Colorado and our work with Youth Voices, both of which seem to be places where students can peruse other students’ passions and pursue their own.

For this episode of Teachers Teaching Teachers, Monika Hardy @monk51295 invited a few of her colleagues:

to join Chris Sloan @csloan and me @paulallison to introduce why we need lab spaces to disrupt and redefine school (Lab Connections). The goal is to facilitate self-directed learning. Here’s how Monika and others introduce their work in an in-progress book they are writing:

Students in Loveland, CO crafted a four year plan of disruption to redefine school. We are just beginning year two. Year four has community/life as school, with the city as the floor plan. Who, what, when, where, how, and with whom you learn, per choice. The premise… nothing is for everyone. We’re redefining success per individual/community. We’re respectfully questioning everything, especially what public education deems as normal. Imagine if the 7 hours a day we currently call school would/could awaken indispensable people. It’s a quiet revolution.

There has been plenty of theory/research invested in what we are doing, and that will be ongoing. But mostly, we have had the privilege and delight to indulge in experimentation/failure/prototyping/etc. The following is our best attempt to capture the key elements learned from key failures. If you are so inclined, shuffle along with us. It’s a kick. You might just fall in love with it.

For more history of the lab, see this video set/documentation (reverse chronological order):redefineschool.tumblr.com

This was a first, exploratory conversation, and one that we hope will inspire you to join as well. We’ll be continuing our conversations with Monika Hardy and her colleagues in the coming weeks on Teachers Teaching Teachers. Join us every Wednesday at edtechtalk.com/live where you’ll hear and see a Livestream broadcast of our conversation, and be invited to chat and ask questions as well.