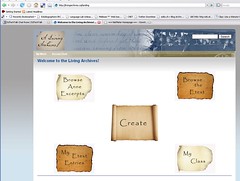 Dave Cormier and Bonnie Stewart joined this show to discuss their project "A Living Archives." As you will hear them explain, this project, which is funded by Canadian Heritage, has students from all three school districts on Prince Edward Island (PEI) using leading edge technologies to bring PEI history and heritage to life. Bonnie and Dave have been building partnerships between the University of Prince Edward Island, the Provincial Archives and Records Office, the PEI Museum and Heritage Foundation, the PEI Library, and the three PEI Boards of Education.

Click Read more to find out what what Dave wrote about "The Living Archives project" in July 2007.

s (museums and archives) getting them to digitize some ‘old stuff’ contextualized by some period literature and records, put that stuff into a digital archive, write some interesting things about those digital artifacts to be published in a new interactive e-book we’ll be building out of drupal, and then go into Second Life and build a replica of 19th century Prince Edward Island. Simple right. All we have to do is meld in with the existing curriculum in three different school districts (two English and one French) build an entire educational program (for the tech literacies) which we will then print to DVD and give out to schools on the Island, adapt out existing digital library work to work with kids, take the existing drupaled distribution of drupal and convince it to do what we want it to do, and build a historical Island in SL that will house the digitized artifacts in period houses… giving people a chance to ‘experience’ life at the start of the 20th century here on the red dirt island on the east coast of Canada.

Why exactly did I want to do this?

Like so many things it started with a simple conversation and then spiraled horribly out of control. Wonderfully, crazily out of control. I’ve been wanting a ‘holistic’ project for a long time now. A project where we tried to take a given bit of learning or knowledge or something and followed it through a whole cycle. In this case, lets say we follow a photo of Gertrude peeling a potato. Give me lots of latitude here… the project is still morphing… this should only be meant to give you a basic idea

4. finds newspaper from 1905 with price of potatoes

5. goes to museum, finds potato cool knife, puts it in 3D scanner (yes… we bought one)

7. story goes into online eportfolio, to be commented on by other students and ‘leaders’

8. story, photo, knife, newspaper go into e-book (still don’t like
this word… need something else) and get tagged and linked to other
things that are similar

10. photo shows up on shelf over fireplace in SL (story shows up when photo is clicked) knife ends up on table and newspaper article (found on table) links to the photo

Bit of a rambling example. but this is (kinda) where we’re hoping to
get. We still have many different ideas going around and are slowly building our team… but the project is confirmed and we’re going to take our best shot at it. We have a gigantic meeting on the 24th of July,
after which I’ll feel alot more comfortable speaking in more specifics.


Check out these presentations: